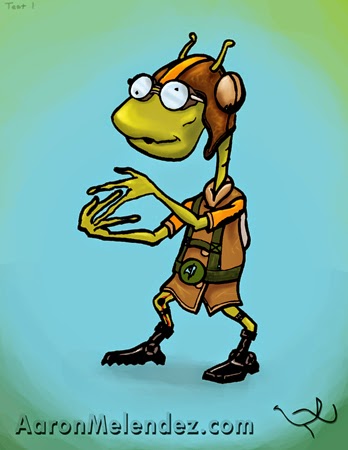 Without giving away anything, this is Gert or nicknamed Gertie after the dinosaur animation and Lindy's Chili and Gertie's Ice Cream. A much larger involved world awaits this little alien and its readers(<--That means it's part of a comic!) but for now, we are left with but a sample.
-Aaron M
Posted by Aaronstration at 2:44 PM No comments:

Snakeweed and the Bananaquit.

http://instagram.com/p/ckFA1slPdq/
I finally get to post this! There were many notable birds during my trip to the Caribbean and wish I could have painted them all. My schedule did allow time to work sporadically on this bananaquit. This piece is intended to be submitted to the GNSI show in Denver with the theme of birds, plants, and pollinators. This Bananaquit(Coereba flaveola) of the Puerto Rican variety is feeding from the snakeweed(Stachytarpheta jamaicensis) plant found throughout the Caribbean contributing directly in pollination. 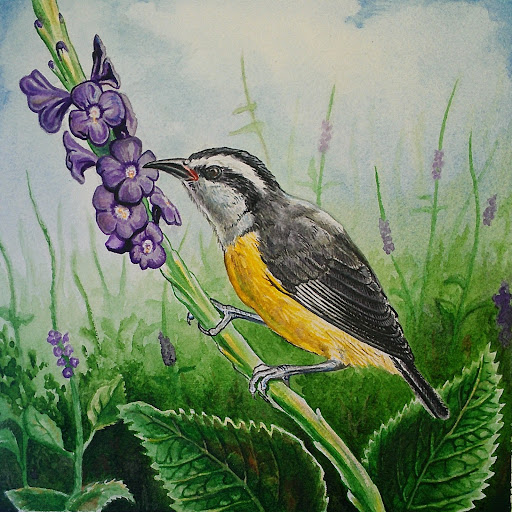 Posted by Aaronstration at 2:48 PM No comments:

http://instagram.com/p/bMij6tlPWb/
I think the title and pic say it all.

Posted by Aaronstration at 5:07 PM No comments:

It's Not A Dinosaur!

Pterosaurs lived during the dinosaurs time but they were not dinosaurs. That title is saved for land reptiles whose legs were positionef below the body. Modern day reptiles have legs that jut to the sides of the body. Pterosaurs had the ability of flight. There is still some debate as to whether actual flying was the norm or primarily gliding.&nbsp; Regardless, in watercolor, I've began a painting of a Pteranodon. It's a toothless pterosaur that was discovered to have a resemblance of short fur covering its body. More to follow... 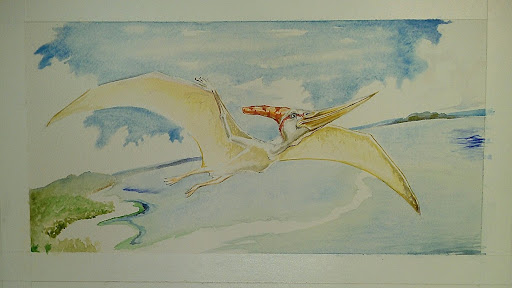 Posted by Aaronstration at 8:43 PM No comments:

Well, I've managed to knock out one of the 9 billion projects I'm working on.  Present is an Eastern Chipmunk. This little guy has four digits on its front and five on the back. At times when it isn't storing and transferring food, it has been seen with a mouth full of dirt. Mmm, dirt.  The chipmunk nests underground and in order to disguise its entrance, the chipmunk carries the excess dirt away.

What I've learned during my time painting this wooded creature is that the Chipmunk is a very deceptive being.  From the number of digits not matching to seemingly performing magic tricks by making a mound of food disappear in its mouth and to putting the "welcome mat" of his home elsewhere, I find I can never trust a Chipmunk again.  Neither should you.
Posted by Aaronstration at 4:53 PM No comments: 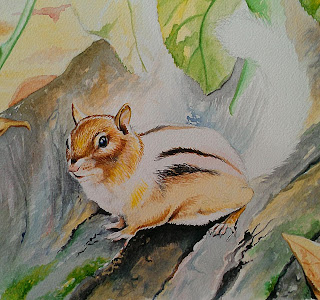 Well, now that being sick for the past month and a half is possibly over, I've turned my attention back to the nine million projects I have to finish.  Here is a selection of something I started during one of my last trips to starved rock.  In case you are unaware of what a chipmunk is, this is a chipmunk.  This little guy was scurrying about as the group I was with walked by.  For a split moment, it stared right at us with soul piercing eyes. Maybe it wasn't that dramatic. Hello all.  The latest page of Bear To All is up at RunningTurkeyStudios.com .  Click this solar squirrel's face if you want to jump straight to page 5 or else hit the site link above.


Posted by Aaronstration at 9:23 PM No comments: