I finished the Snapping Turtle in time to submit for the GNSI show this summer.  I finally prepped the painting for printing and web view.  I hope you enjoy it as much as I painting it.  This, along with several other prints are among the ones available for sale.

﻿ ﻿
I recently accepted a job to do labels for a local start up brewery.  I am very excited about this opportunity and as much as I'd like to share some details, I'm afraid we will have to wait.
Posted by Aaronstration at 4:35 PM 2 comments:

Works in Progress and Sales

I last wrote about the wash from the other day.  In case you didn't know, I laid a wash down and it was absolutely horrid.  I spent several hours on it before work for a couple days but it could not be saved.  I ended up pitching it.  Embarrassment has kept me from posting a picture of it.  I started two paintings today and had another one lying around as a work in progress.  When I wasn't playing Spider-Man with my son,  I was working these three paintings.  They are all based from things I saw this past summer.

All three serve a teaching purpose. The American Robin is part of several paintings I've planned that comment on nature and it's assimilation into human development.  This particular piece was designed to work on producing mechanical objects.  The primary purpose of the Day Lily is to increase proficiency in washes and fading backgrounds.  The Snapping Turtle I plan to play with light and it's relationship with darkness.  These paintings should be done fairly soon and ready for photographing.

On a side note, I listed several reproductions on sale through ebay.  I wanted to see how things would go before I told anyone I know they were up.  So far I've had maybe 6 views total amongst the several "prints".  I'm working on a more attractive template to use for my listings in the future but feel free to check them out anyway.  Just search my name.  The views would definitely calm the anxiety! 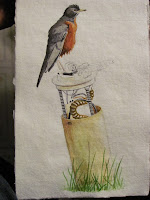 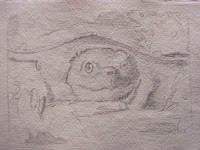 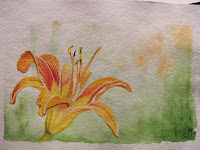 Posted by Aaronstration at 1:03 AM No comments:

I laid the ugliest wash ever the other day!!!  I spent sessions trying to lift it and fix it.  Nothing worked.  I tried painting the foreground to see if it would look better but no.  Finally, just now I had to accept that it was a loss and threw away the painting.  Tomorrow I will try it agian and hopefully get it right.  Good night, I'll post a pic when the wash is done.
Posted by Aaronstration at 2:10 AM No comments:

So last I left off about printing, I was testing several papers and researching printers.  The paper issue has been solved, a printer has been chosen, and terms have been clearly defined!


I've recently learned that using the term "print" for paintings being being printed on paper from printers is inaccurate.  It sounds a bit confusing but after an article I read, it all made sense.  The term print was used well before the times of the common inkjet printers for older presses and technology.  In the art world, a "print" is of these older technologies and is not defined by anything produced from a modern inkjet printer.  Instead, images created using an inkjet are known as reproductions.  If a simple analogy would suffice... the misuse of the word print is grossly abused by the modern society in a striking similarity to what the modern society constitutes as a vampire. Yikes!!! http://www.washingtonpost.com/opinions/a-print-vs-a-reproduction/2011/09/30/gIQAysTnTL_story.html
And now onto printers and paper...  I've chosen an Epson Stylus 1400.  It's a slightly older model but the price tag of 300 instead of 900 just made sense to me.  The work it produces is incredible and can "print" border less in sizes up to 13"x19".  User defined sizes, non-border less are up to 13"x44".  There has been some debate over inks and the archival qualities of other companies, so I've settled on the claria inks of this printer because of the existence of independent testing and scientific information provided to the public.  The paper I've chosen I found at Central Camera.  It is the Canon Infinity Arches Aquarelle Rag 240 gsm paper.  Fancy words aside, it's a highest quality watercolor paper designed for inkjet printers!!!  It is perfectly amazing!!!  I can't even begin to tell you how excited I was when I viewed the first image digitally printed onto it.
Well, that is enough blah blah blah for now.  Here are a couple more paintings to look at.

Ahh, so I wake up the other day ready to paint and enjoy the morning. It didn't go so well. You see, the belt on my tire popped.  So instead of enjoying the weather and painting, I spent it calling tire places and racing against what little time I had to replace it before going to work.  Somehow, I made it to work with a few minutes to spare and it only cost me getting dressed, shaving, and a couple meals.
Posted by Aaronstration at 12:45 PM No comments: